In March 2020, ITV reported that a faith healer has been accused of “exploiting” people’s anxiety about the coronavirus crisis by selling a “plague protection kit” for £91. Bishop Climate Wiseman, head of the Kingdom Church in Camberwell, south London, has promised his followers the small bottle of oil and piece of red yarn will protect them from Covid-19. In a blog post, Bishop Wiseman claimed his concoction of cedar wood, hyssop and scarlet yarn acts as “an invisible barrier to the powers of darkness”. He wrote: “It is by faith that you can be saved from the coronavirus pandemic by covering yourself with the divine plague protection oil and wearing the scarlet yarn on your body. That is why I want to encourage you, if you haven’t done so already, to get your divine plague protection kit today!”

He claimed that the remedy was based on a passage from chapter 14 of the Old Testament Book of Leviticus. It reads: “Then he is to take the cedar wood, the hyssop, the scarlet yarn, and the live bird, dip them into the blood of the dead bird and the fresh water, and sprinkle the house seven times. In this way, he will make atonement for the house, and it will be clean.”

Bishop Wiseman told the PA news agency the church had sold more than 1,000 of the kits. “This is based on the Bible – I’m a Christian and there is a way that the Bible says to protect us from plagues.” One can also buy miracle money house blessing oil and anointed oil for court cases. On the Kingdom Church’s website, it claims thousands of people have been healed from “all sorts” of sickness and disease since it was founded in 2005.

Now, the Charity Commission has appointed an interim manager to the church following concerns raised by the National Secular Society about ‘plague protection kits’ sold by its bishop. England and Wales’s charity regulator announced that it appointed an interim manager to The Kingdom Church GB in February, who will “consider the charity’s future operation and viability”. 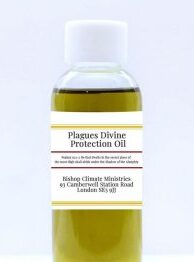 Elsewhere, the oil is advertised as follows:

Plagues Divine Protection Anointing Oil Have you been battling with countless amount of fear due to an economical wide spread of plaques and viruses? Then this Anointing Oil is for you.

The Plagues Divine Protection Anointing Oil was created by Master Prophet, Prophet Climate Wiseman through divine guidance and instruction from the Holy Spirit. This oil contains two biblical integrant which is biblically proven to remove plagues of all kind. These two Integrants are Hyssop and Cedar wood. The Bible clearly tells us in the book of Leviticus 14:51-53 “Then he is to take the cedar wood, the hyssop, the scarlet yarn and the live bird, dip them into the blood of the dead bird and the fresh water, and sprinkle the house seven times. He shall purify the house with the bird’s blood, the fresh water, the live bird, the cedar wood, the hyssop and the scarlet yarn. Then he is to release the live bird in the open fields outside the town. In this way he will make atonement for anointedoils

The commission said it had “serious ongoing concerns” about the charity’s administration and the financial relationship with its two subsidiary companies. It found the charity does not have a bank account and charity funds have instead been deposited into the charity’s subsidiaries’ bank accounts. It is investigating the legality of this relationship. The commission only appoints interim managers to charities “after very careful consideration” if there is misconduct or mismanagement in the administration of a charity, or if it is necessary or desirable to protect the charity’s property.

The post originally included claims that “every coronavirus and any other deadly thing” would “pass over” those using the oil and yarn. It was later edited to remove some specific references to coronavirus, but continued to claim people could “be saved from every pandemic” by using the oil and string.