How a homeopath almost saved the world

I was reminded of an event that I had forgotten which, however, is so remarkable that we should remember it. It relates to nothing less than a homeopath’s attempt to save the world!

The homeopath’s name is Grace DaSilva-Hill. She has been a professional homeopath since 1997, with a clinic in Charing (Kent) and international on Zoom, Skype or WhatsApp video. She practises Sensation Homeopathy as refined by Drs Joshis (Mumbai), and Homeopathic Detox Therapy as developed by Dr Ton Jensen. She is also a practitioner of EFT-Tapping. In 2014, Grace very nearly saved the world with homeopathy – well, at least she gave it her very best try. Here is her original plan: 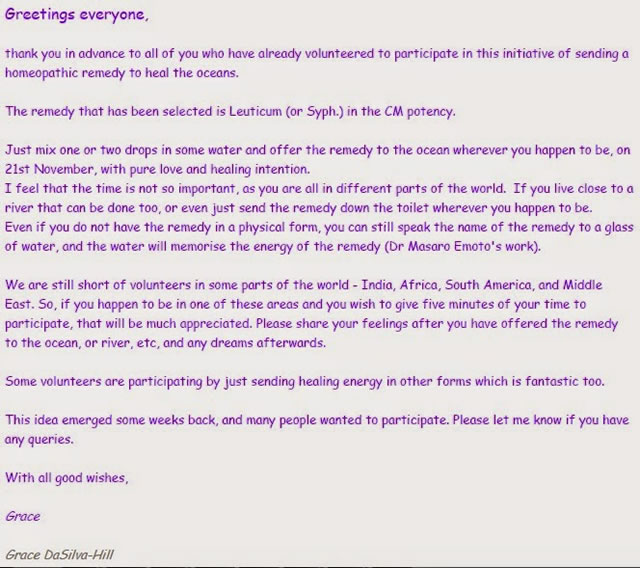 But, at the same time, it is also worrying. Homeopaths are taken seriously by many influential people. Think of Prince Charles, for instance, or consider the way German homeopaths have convinced the government of Bavaria to invest in research into the question of how homeopathy can be used to reduce antibiotic resistance.

At the time, the formidable Andy Lewis on his QUACKOMETER commented as follows:

We might dismiss this as the fantasies of a small group of homeopaths. However, such thinking is widespread in homeopathic circles and has consequences. Grace is a well known homeopath in the UK, and in the past, has been a trustee and treasurer for the Ghana Homeopathy Project – an organisation that has been exporting this European form of quackery to West Africa. Grace believes that serious illnesses can be treated by a homeopath. For an article in the journal of the Alliance of Registered Homeoapths, Grace discusses treating such conditions as menigitis, malaria and stroke.

Homeopaths in West Africa have hit the news this week as a group tried to enter Liberia in order to use their spells on people with Ebola. The WHO fortunately tried not let them near any actual sick people and they have been kicking and screaming since. The Daily Mail’s rather dreadful article reported that they

“had used homeopathic treatments on patients, despite the instructions from health officials in the capital Monrovia not to do so. She said she had not felt the need to quarantine herself after returning to India but was monitoring her own condition for any signs of the disease.”

The homeopaths appear to have absolutely no understanding how dangerous and irresponsible their actions have been….

Homeopathy is stupid. Magical thinking. A nonsense. Anything goes. And whilst those doctors in the NHS who insist on spending public money on it without taking a responsible stand against the common and dangerous excesses, they can expect to remain under constant fire from those who think they are doing a great deal of harm.

Meanwhile, the public funding of homeopathy in England has stopped; France followed suit. Surely Grace’s invaluable help in these achievements needs to be acknowledged! If we regularly remind decision-makers and the general public of Grace’s attempt to save the world and similarly barmy things homeopaths are up to, perhaps the rest of the world will speed up the process of realizing the truth about homeopathy!?

25 Responses to How a homeopath almost saved the world