Hesperidin is a flavonoid found in citrus fruits, especially orange and grapefruit. It is said to have antioxidant and anti-inflammatory effects. Research into hesperidin began in the 1940s but only recently interest turned buoyant, and all sorts of benefits have been suggested. Here are just three recent clinical studies: 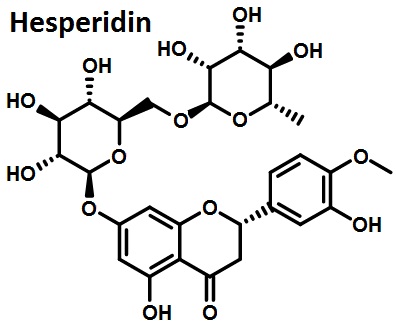 The latest suggestion for Hesperidin is – how could be be otherwise? – that it helps against COVID-19: Hesperidin can block coronavirus from entering host cells through ACE2 receptors which can prevent the infection. Anti-viral activity of hesperidin might constitute a treatment option for COVID-19 through improving host cellular immunity against infection and its good anti-inflammatory activity may help in controlling cytokine storm. Hesperidin mixture with diosmin co-administrated with heparin protect against venous thromboembolism which may prevent disease progression. Based on that, hesperidin might be used as a meaningful prophylactic agent and a promising adjuvant treatment option against SARS-CoV-2 infection.

According to one source, Hesperidin can cause several problems:

No doubt, Hesperidin is an interesting substance. Yet, I feel that much more research is needed until we can be reasonably sure that it is clinically effective for any condition, particularly COVID-19.