This is an analysis that I have long hesitated to conduct. The reason for my hesitation is simple: some people might think it is vindictive, revengeful or ad hominem. After reflecting about it for years, I have now decided to go ahead with it (sorry, it’s a bit lengthy). This case study is not meant to be vindictive, but offers an important insight into the power of conflicts of interest in SCAM that are not financial but ideological. I think it is crucial that people are aware of and consider such conflicts carefully, and I can’t see how else I might demonstrate my point so plainly.

Dr Adrian White was a co-worker of mine for about 10 years. He became a trusted colleague, my ‘right hand’ man and even my deputy at my Exeter department. When I discovered that my trust had been misplaced, I did not prolong his contract (I will not dwell on this episode, those who are interested find it in my memoir). Adrian then got a senior research fellowship with Prof John Campbell (not my favourite colleague at Exeter) at the department of general practice where he continued his research on acupuncture for about 10 more years largely unsupervised.

Adrian had been an acupuncturist body and soul (in fact, I had never before met anyone so utterly convinced of the value of this therapy). When he joined my team, he was scientifically naive, and we spent many month trying to teach him how to think like a scientist. Initially, he found it very difficult to think critically about acupuncture. Later, I thought the problem was under control. Yet, most of his research in my department was guided by me and tightly supervised (i.e. I made sure that out studies were testing rather than promoting SCAM, and that our reviews were critical assessments of the existing evidence).

Thus there exist two separate and well-documented periods of a pro-acupuncture researcher:

What could be more tempting than to compare Adrian’s output during these two periods?

To do this, I looked up all of Adrian’s 120 publications on acupuncture and selected those 52 articles that generated factual new data (mostly clinical trials or systematic reviews). As it happens, they are numerically distributed almost equally within the two periods. The endpoints for my analysis were the directions of the conclusions of his papers. I therefore extracted, dated, and rated the 52 articles as follows:

To render this exercise transparent (occasionally, I was not entirely sure about my ratings), I copied all the 52 conclusions and provided links to the original papers so that anyone inferested is able to check easily.

Here are my findings. Articles 1 – 27 were published AFTER Adrian had left my department; articles 28 – 52 are his papers from the time while he worked with me.

The results are remarkable (particularly considering that one would not expect unbiased studies or reviews of acupuncture to generate plenty of positive conclusions):

From these figures, it is tempting to calculate the ratios for both periods of negative : positive conclusions:

If that is not impressive, I don’t know what is!

Looking just at the positive and the negative papers over the years: 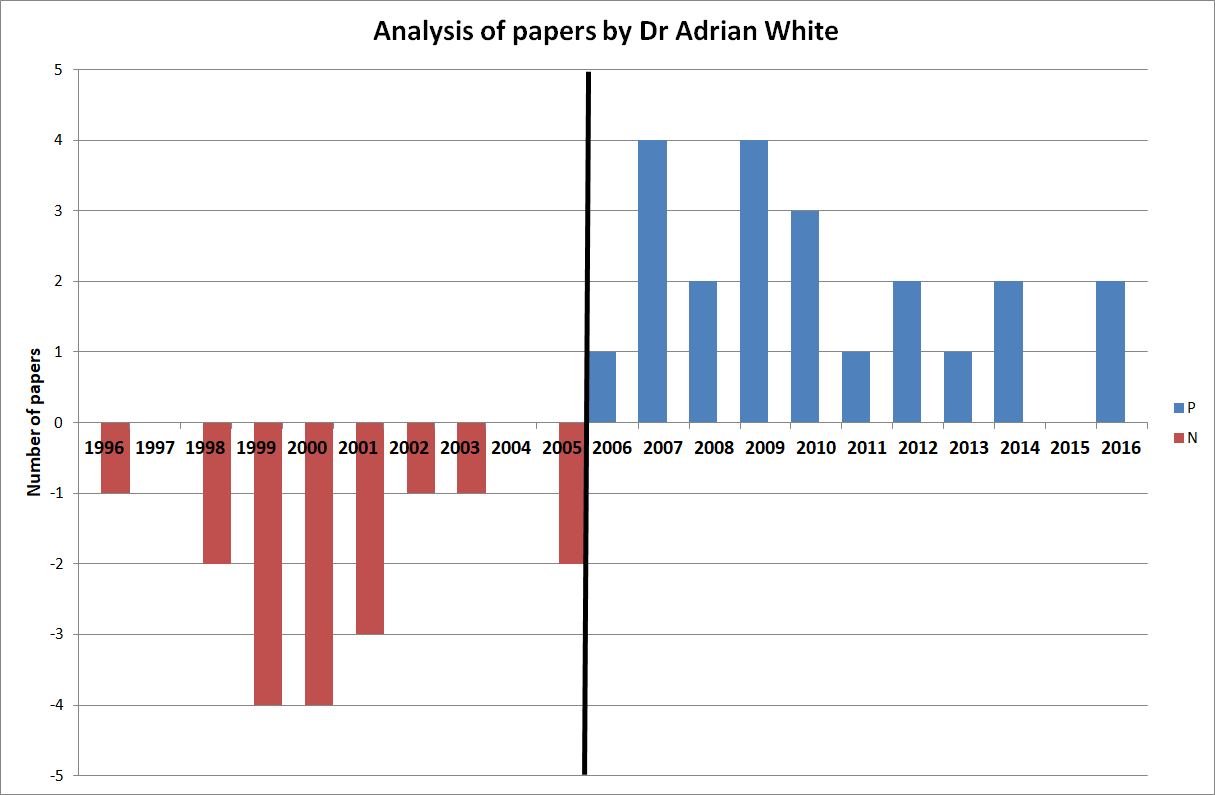 One could discuss these papers in more detail, but I think this is hardly necessary. Just a few highlights perhaps: look at articles No 5, 20 and 27 for examples of turning an essentially negative finding into a positive conclusion. Notice that Adrian conducted a clinical trial of acupuncture for smoking cessation (No 49) while working with me and later published uncritical positive reviews on the subject. Does this not indicate that he distrusted his own study because it had not generated the result he had hoped for?

Of course, my analysis is merely a case study and therefore my findings are not generalisable. However, in my personal experience, the described phenomenon is by no means an exception in SCAM research. I have observed similar phenomena over and over again. Just look at the ALTERNATIVE MEDICINE HALL OF FAME that I created for this blog:

But Adrian’s case might be unique because it allows us to make a longitudinal observation over two decades. And it suggests to me that an ideological bias can (and often is) so strong and indistructable that is re-emerges as soon as it is no longer kept under strict control.

I have long suspected that ideological conflicts of interest have a much more powerful influence in SCAM research than financial ones. Such an overpowering influence might even be characteristic to much of SCAM research. And because it can be so dominant, it seems important to know about. People reading research need to be aware that it originates from a biased source, and funders who finance research would be wise to think twice about supporting researchers who are likely to generate findings that are biased and therefore false-positive. In the final analysis, such research is worse than no research at all.