‘DRX9000’ for back pain: a nice little earner for chiropractors and other back pain quacks

What is the ‘DRX9000 decompression system’? It is a table attached to Space Age-looking controls that allegedly stretches the disks of the vertebrae, allowing protrusions to be pulled back into place and thus taking pressure off nerve roots. The website of Excite Medical informs us that the DRX9000® has been cleared by the FDA to treat patients suffering with incapacitating lower back pain and sciatica caused by herniated discs, degenerative discs, and posterior facet syndrome.

This sounds almost as though it is evidence based, doesn’t it?

My Medline search resulted in three papers about the device (if anyone knows of more, please let me know):

Studies one and two are retrospective and thus useless for establishing cause and effect. Study 3 is an RCT, but as an equivalence study it is desperately underpowered. Most likely, it merely demonstrates that both of the tested treatments are ineffective.

In other words, there seems to be no good evidence that the DRX9000 works for low back pain (LBP). This can hardly come as a surprise to anyone who has kept up with the evidence. What is more, traction can also cause significant harm. The current Cochrane review concludes that traction, either alone or in combination with other treatments, has little or no impact on pain intensity, functional status, global improvement and return to work among people with LBP. 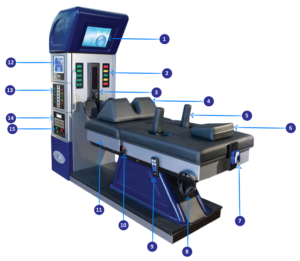 Yet, the claims for the device are grandiose. According to a recent article in NBCnews (from which I take the liberty of citing passages below), the company behind the DRX9000, Excite Medical, claims that nearly 9 out of 10 patients who qualify for treatment on the DRX9000 will get relief. Excite Medical also says that 2,400 of its systems are in use in 45 nations and shows it off at trade shows everywhere from Las Vegas to Dusseldorf, Germany, and Dubai, United Arab Emirates. Chiropractors across the United States buy the machines from Excite Medical, often using the same claims as the manufacturers — sometimes even going beyond them.

But a FairWarning investigation — based on review of lawsuits, scientific studies, government documents, chiropractic websites and interviews with experts — found that the claims of success for spinal decompression stretch the truth, enticing patients to pay thousands of dollars for a treatment that has never been proven in scientifically rigorous studies to live up to its stupendous billing.

Despite a spate of state regulatory actions in the 2000s against Axiom Worldwide, the original manufacturer of the DRX9000, and chiropractors for making unproven claims, they still permeate the internet. And federal and state regulators who can sanction false claims now show little evidence that they are interested in reining them in…

“This non-surgical spinal decompression system … is scientifically Proven By Mayo Clinic, Duke University, Stanford, and Johns Hopkins University School of Medicine!” according to the website for GO Chiropractic in Illinois, which offers treatment with the DRX9000. Jamie Stephens, one of the chiropractors who runs Go Chiropractic, said in an email, “We have seen nothing but outstanding results from this technology,” and referred further questions to Excite Medical, which he said provided his advertising materials…

Excite Medical says [the treatment] typically runs about $3,500 for a full course of sessions on the DRX9000…

Chiropractors who paid as much as $125,000 for the device also got a package of suggested promotional materials, including the claim the DRX9000 was used in a scientific study that showed an 86 percent success rate. Many of the chiropractors took out newspaper ads that included the claims.

In later lawsuits, chiropractors complained that they were duped by Axiom. One, James Spiering in Texas, described being flown, plane fare and hotel paid, to Axiom headquarters in Florida, where he was told he would recover his investment in four months and clear $1.7 million in five years. Spiering said he was shown videos full of “fraudulent” claims. The parties settled out of court in 2010 for an undisclosed amount.

Regulators across the U.S. also had started to take notice of the DRX9000’s claims of extraordinary success. Over the course of three years or so, the Oregon attorney general, the Florida attorney general and a group of 11 California district attorneys all filed suits against Axiom or a former chiropractor who created some of its marketing. The suits ended in penalties — $1.125 million in the California case — and Axiom agreed to only make claims based on reliable scientific evidence, according to news stories and settlement documents.

What does that tell us?

I think it suggests that:

8 Responses to ‘DRX9000’ for back pain: a nice little earner for chiropractors and other back pain quacks