No efficacy of acupressure on quality of recovery after surgery

Acupressure is the stimulation of specific points, called acupoints, on the body surface by pressure for therapeutic purposes. The required pressure can be applied manually of by a range of devices. Acupressure is based on the same tradition and assumptions as acupuncture. Like acupuncture, it is often promoted as a panacea, a ‘cure-all’.

Several systematic reviews of the clinical trials of acupressure have been published. An overview published in 2010 included 9 such papers and concluded that the effectiveness of this treatment has not been conclusively demonstrated for any condition.

But since 2010, more trials have become available.

Do they change the overall picture?

The objective of this study was to test the efficacy of acupressure on patient-reported postoperative recovery. The researchers conducted a single centre, three-group, blind, randomised controlled, pragmatic trial assessing acupressure therapy on the PC6, LI4 and HT7 acupoints. Postoperative patients expected to stay in hospital at least 2 days after surgery were included and randomised to three groups:

The primary outcome was the change in the quality of recovery (QoR), using the QoR-15 questionnaire, between postoperative days 1 and 3. Key secondary outcomes included patients’ satisfaction, postoperative nausea and vomiting, pain score and opioid (morphine equivalent) consumption. Assessors for the primary and secondary endpoints were blind to the group allocation.

The authors concluded that two days of postoperative acupressure therapy (up to six treatments) did not significantly improve patient QoR, postoperative nausea and vomiting, pain score or opioid consumption. Acupressure, however, was associated with improved patient satisfaction. 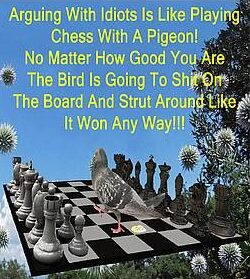 This study is a good example to show why it is so difficult (or even impossible) to use a clinical trial for demonstrating the ineffectiveness of a therapy for any given condition. The above trial fails to show that acupressure had a positive effect on the primary outcome measure. Acupressure fans will, however, claim that:

In the end, such discussions often turn out to be little more than a game of pigeon chess. Perhaps it is best to ask before planning such a trial:

IS THE ASSUMPTION THAT THE TREATMENT WORKS FOR THIS CONDITION PLAUSIBLE?

If the answer is no, why do the study in the first place?