Pisa syndrome (PS) is a condition in which there is sustained involuntary flexion of the body and head to one side and slight rotation of the trunk so the person appears to lean like the Leaning Tower of Pisa. The PS can occur as a complication of Parkinson’s disease (PD). It can also be an adverse effect of some medications. It is characterized by a trunk lateral flexion higher than 10 degrees which is reversible when lying. The underlying pathophysiological mechanisms responsible for the development of PS are poorly understood. One pathophysiological hypothesis is that PS in PD is caused by an altered verticality perception, due to a somatosensory impairment.

The management of PS remains a challenge. Physiotherapy with early rehabilitation emphasising stretching exercises for the external oblique and paraspinal muscles is usually recommended. Therapy is also needed to improve static, dynamic posture and the control of pain symptoms. Osteopathic Manipulative Treatment (OMT) is also sometimes advocated for PS, but does it work? 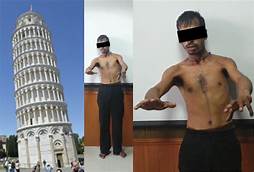 The aim of the study was to assess OMT efficacy on postural control in PD-PS patients by stabilometry. In this single-blinded trial the investigators studied 24 PD-PS patients, 12 of whom were randomly assigned to receive a multidisciplinary physical therapy protocol (MIRT) and sham OMT, while the other 12 received OMT plus MIRT for one month. The primary endpoint was the eye closed sway area assessment after the intervention. Evaluation of trunk lateral flexion (TLF) was also performed.

The authors concluded that among PD-PS patients, MIRT plus OMT showed preliminary evidence of postural control and TLF improvement, compared to the control group.

The authors entitled their paper ‘Efficacy of Osteopathic Manipulative Treatment on Postural Control in Parkinsonian Patients With Pisa Syndrome: A Pilot Randomized Placebo-Controlled Trial’. As a pilot study, it should not test efficacy but explore the feasibility of a definitive trial. The fact the authors report outcome data, indicates to me that this is, in fact, not a pilot study, but a hopelessly underpowered clinical trial. This means that the findings could be due merely to chance alone. And this, in turn, means that the researchers owe it to their patients to conduct a properly powered RCT.