Acupuncture: an update of the most reliable evidence – PART 1

Someone alerted me to a short article (2008) of mine that I had forgotten about. In it, I mention the 32 Cochrane reviews of acupuncture available at the time and the fact that they showed very little in favour of acupuncture. This made me wonder to what extent the situation might have changed in the last 12 years. So, I made a renewed attempt at evaluating this evidence. The entire exercise comes in three parts:

Acupuncture has a long history of ups and downs. Its latest renaissance started in 1971, when a journalist in President Nixon’s press corps experienced symptomatic relief after being treated for postoperative abdominal distension. He reported this experience in The New York Times, which triggered a flurry of interest and research. In turn, it was discovered that needling might release endorphins in the brain or act via the gate control mechanism. Thus, plausible modes of action seemed to have been found, and the credibility of acupuncture increased significantly. Numerous clinical trials were initiated, and their results often suggested that acupuncture is clinically effective for a surprisingly wide range of conditions. Both a World Health Organization report and a National Institutes of Health consensus conference provided long lists of indications for which acupuncture allegedly was of proven benefit.

Many of the clinical studies, however, lacked scientific rigor. Most experts therefore remained unconvinced about the true value of acupuncture, particularly as a treatment for all ills. Some investigators began to suspect that the results were largely due to patient expectation. Others showed that the Chinese literature, a rich source of acupuncture trials, does not contain a single negative study of acupuncture, thus questioning the reliability of this body of evidence.

A major methodological challenge was the adequate control for placebo effects in clinical trials of acupuncture. Shallow needling or needling at non-acupuncture points had been used extensively for this purpose. Whenever the results of such trials did not show what acupuncture enthusiasts had hoped, they tended to claim that these types of placebos also generated significant therapeutic effects. Therefore, a negative result still would be consistent with acupuncture being effective. The development of non-penetrating needles was aimed at avoiding such problems. These “stage dagger”-like devices are physiologically inert and patients cannot tell them from real acupuncture. Thus, they fulfil the criteria for a reasonably good placebo.

The seemingly difficult question of whether acupuncture works had become complex—what type of acupuncture, for what condition, compared with no treatment, standard therapy, or to placebo, and what type of placebo? Meanwhile, hundreds of controlled clinical trials had become available, and their results were far from uniform. In this situation, systematic reviews might be helpful in establishing the truth, particularly Cochrane reviews, which tend to be more rigorous, transparent, independent, and up-to-date than other reviews. The traditional Chinese concept of acupuncture as a panacea is reflected in the fact that 32 Cochrane reviews are currently (January 2008) available, and a further 35 protocols have been registered. The notion of acupuncture as a “heal all” is not supported by the conclusions of these articles. After discarding reviews that are based on only 3 or fewer primary studies, only 2 evidence-based indications emerge: nausea/vomiting and headache. Even this evidence has to be interpreted with caution; recent trials using the above-mentioned “stage-dagger” devices as placebos suggest that acupuncture has no specific effects in either of these conditions.

Further support for the hypothesis that acupuncture is largely devoid of specific therapeutic effects comes from a series of 8 large randomized controlled trials (RCTs) initiated by German health insurers (Figure). These studies had a similar, 3-parallel-group design: pain patients were randomized to receive either real acupuncture, shallow needling as a placebo control, or no acupuncture. Even though not entirely uniform, the results of these studies tend to demonstrate no or only small differences in terms of analgesic effects between real and placebo acupuncture. Yet, considerable differences were observed between the groups receiving either type of acupuncture and the group that had no acupuncture at all. 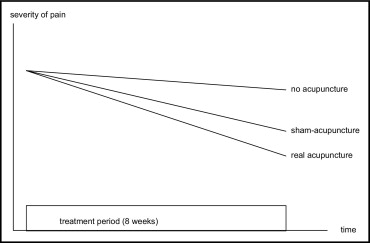 Enthusiasts employ such findings to argue that, in a pragmatic sense, acupuncture is demonstrably useful: it is clearly better than no acupuncture at all. Even if it were merely a placebo, what really matters is to alleviate pain of suffering patients, never mind the mechanism of action. Others are not so sure and point out that all well-administrated treatments, even those that generate effects beyond placebo, will induce a placebo response. A treatment that generates only non-specific effects (for conditions that are amenable to specific treatments) cannot be categorized as truly effective or useful, they insist.

So, after 3 decades of intensive research, is the end of acupuncture nigh? Given its many supporters, acupuncture is bound to survive the current wave of negative evidence, as it has survived previous threats. What has changed, however, is that, for the first time in its long history, acupuncture has been submitted to rigorous science—and conclusively failed the test.

[references in the original paper]

Part 2 will be posted tomorrow.

2 Responses to Acupuncture: an update of the most reliable evidence – PART 1