Leprosy: some homeopaths advise to treat it with homeopathy 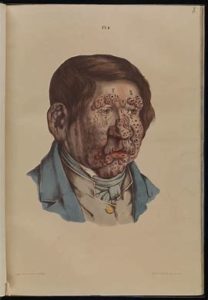 Leprosy can be a devastating infection. But, since many years, it is treatable. The WHO developed a multidrug therapyTrusted Source in 1995 to cure all types of leprosy. It’s available free of charge worldwide. Additionally, several antibiotics are used to kill the bacteria that causes leprosy, e.g.:

Yes, leprosy is treatable … that is, unless you follow the advice issued in this article and treat it with homeopathy:

Homoeopathy remedies are given on the basis of similar signs and symptoms along with the miasmatic classification of diseases. Homoeopathy physicians said that leprosy is characteristics of syphilis miasm due to their mental and physical conditions. Mentally person thinks that he/she may be isolated and left alone in a corner of society due to dirty looking of the skin and tendency to spread of disease from direct contact. They feel alone and make hypothesis that the society needs outbreak from me because of physical disabilities like paralysis, and loss of controls on body functions. A well selected homoeopathy remedy helps out patient to come out from this condition and make possible to live in society from permanent restoration of health.

Leprosy is a non-fatal infectious disease caused by bacteria Myobacterium leprae and spread by direct contact and other mode of transmissions. It may be treated with homoeopathic medicines if well selected medicine related to mental and physical symptoms is taken by patients. Homoeopathy medicines help out patients to rearrange the vital force to fight against infectious bacteria and makes possible that the body itself fight against the disease.

To be sure, I ran a quick Medline search. You guessed the result, I suppose: not a single hint from anything resembling a clinical trial that homeopathy might be an effective therapy of leprosy.

One question, however, does remain open: how do homeopaths who claim such irresponsible nonsense sleep?

(And in case you think that the above post is a rare exception, you have not recently searched the Internet!)

5 Responses to Leprosy: some homeopaths advise to treat it with homeopathy