We have looked at curcumin several (tumeric) times before (see here, here and here). It seems to have a fascinating spectrum of pharmacological activities. But do they translate into clinical usefulness? To answer this question, we obviously need clinical trials. Unfortunately, not many have become available. Here are two recent studies:

Due to the potential benefits of curcumin in the ischemic heart disease, this study was performed to evaluate whether pretreatment with curcumin may reduce myocardial injury following elective percutaneous coronary intervention (PCI). A randomized clinical trial was performed on 110 patients undergoing elective PCI. The intervention group (n = 55) received a single dose of 480 mg nanomicelle curcumin orally and the standard treatment before PCI, while the control group (n = 55) received only the standard treatment., Serum concentrations of CK-MB and troponin I was measured before, 8 and 24 h after the procedure to assess myocardial damage during PCI. The results showed that the raise of CK-MB in curcumin group was half of the control group (4 vs. 8 cases) but was not significant. There were no significant differences in CK-MB levels at 8 (P = .24) and 24 h (P = .37) after PCI between the curcumin and the control group. No significant difference was also found in troponin I levels at 8 (P = 1.0) and 24 h (P = .35) after PCI between the groups. This study did not support the potential cardioprotective benefit of curcumin against pre-procedural myocardial injury in patients undergoing elective PCI. 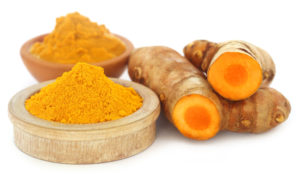 Inflammation along with oxidative stress has an important role in the pathophysiology of unstable angina which leads to acute myocardial infarction, arrhythmias and eventually heart failure. Curcumin has anti-inflammatory and anti-oxidant effects and thereby, it may reduce cardiovascular complications. This randomized controlled trial aimed to investigate the effects of curcumin on the prevention of atrial and ventricular arrhythmias and heart failure in patients with unstable angina.

Forty patients with unstable angina who met the trial inclusion and exclusion criteria, participated in this double-blind randomized clinical trial. The patients were randomized into two groups: curcumin (80 mg/day for 5days) and placebo (80 mg/day for 5days). Cardiac function was evaluated by two-dimensional echocardiography devices at baseline (immediately after hospitalization) and 5 days after the onset of the trial. Atrial and ventricular arrhythmias were recorded by Holter monitors in cardiology ward, Ghaem academic hospital, Mashhad, Iran. Progression to heart failure, myocardial infarction, and pulmonary and cardiopulmonary resuscitation events as well as mortality were recorded daily throughout the study.

There were no significant differences between the two groups in atrial and ventricular arrhythmias (p=0.2), and other echocardiographic parameters (Ejection fraction, E, A, E/A ratio, Em, and pulmonary artery pressure) at baseline and five days after the start of the trial.

Nanocurcumin administered at the dose of 80 mg/day for five days had no effect in the incidence of cardiovascular complications in patients with unstable angina.

Clinical trials are not a good tool for proving a negative; they rarely can prove that a therapy is totally useless. Therefore, we cannot be sure that the many fascinating pharmacological activities of curcumin do not, after all, translate into some clinical benefit. However, what we can say with a high degree of certainty is this: currently there is no good evidence to show that curcumin is effective in treating any human condition.

Perhaps there is a more general lesson here about herbal medicine. Many plants have exiting pharmacological activities such as anti-biotic or anti-cancer activity which can be shown in-vitro. These are then hyped by entrepreneurs and enthusiasts of so-called alternative medicine (SCAM). Such hype fools many consumers and is thus good for business. But in-vitro activity does not necessarily mean that the therapy is clinically useful. There are many reasons for this, e.g. toxicity, lack of absorption. The essential test is always the clinical trial.

13 Responses to Curcumin: in vivo veritas!