The most regularly reported serious complication of chiropractic neck manipulation is a stroke due to arterial dissection. Atlantoaxial dislocation (a dislocations of the first and second vertebrae which means that the spinal cord is in danger of being compressed which, in turn, would have devastating consequences) has not been previously reported, but is just as serious. 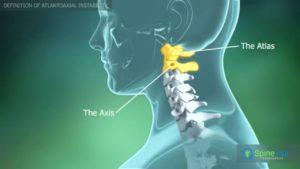 This new case-report described an 83-year-old man with a history of old cerebellar infarction who presented to the emergency department with acute left hemiplegia after a chiropractic manipulation of the neck and back several hours before symptom onset. Mild hypoesthesia was observed on his left limbs. No speech disturbance, facial palsy, or neck or shoulder pain was observed.

Intravenous thrombolytic treatment was given 238 min after symptom onset. Brown-Sequard syndrome (damage to one side of the spinal cord causing paralysis and loss of feeling on one side) subsequently developed 6 h after thrombolysis with a hypo-aesthetic sensory level below the right C5 dermatome. An emergent brain magnetic resonance angiography did not reveal an acute cerebral infarct but rather an atlantoaxial dislocation causing upper cervical spinal cord compression.

A literature review revealed that only 15 patients (including the patient mentioned here) with spinal disorder mimicking acute stroke who received thrombolytic therapy have been reported. Atlantoaxial dislocation may present as acute hemiplegia mimicking acute stroke, followed by Brown-Sequard syndrome. Inadvertent thrombolytic therapy is likely not harmful for patients with atlantoaxial dislocation-induced cervical myelopathy. The neurological deficits of patients should be carefully and continuously evaluated to differentiate between stroke and myelopathy.

The authors of this case report provide no detail about the exact treatment that caused this complication, nor do they elaborate on the type of healthcare professional who administered the cervical manipulation (they focus on the issue of non-indicated thrombolytic therapy). We also do not learn why the patient had neck manipulations in the first place. However, the authors seem confident that the ‘chiropractic manipulation’ was the cause of this atlantoaxial dislocation causing severe upper cervical spinal cord compression.

The patient was treated surgically, with corticosteroids and subsequent rehabilitation. Two months later, his neurological deficits were much improved.

85 Responses to Another serious complication after chiropractic neck manipulation