Homotoxicology: ‘the best kept detox secret’? No, it’s even worse than homeopathy!

Homotoxicology is sometimes praised as the ‘best kept detox secret‘, often equated with homeopathy, and even more often not understood at all.

But what is it really?

Homotoxicology is the science of toxins and their removal from the human body. It offers a theory of disease which describes the severity and duration of an illness or disorder based on toxin-loading relative to our body’s ability to detoxify. In other words, it tells you how sick you’ll get when what stays inside progressively overwhelms our ability to get the garbage out. It explains what you can expect to see as you start removing toxins.

And yes, there is a hierarchy of toxic substances. Homotoxicology says you should remove the gentler ones first. As the body strengthens, it will be able to handle the really bad stuff (i.e., heavy metals). This explains why some people do really well on the same detox treatments that take others out at the knees.

So, what is it really, and what evidence is there to support it?

Homotoxicolgy is a therapy developed by the German physician and homeopath Hans Reckeweg. It is strongly inﬂuenced by (but not identical with) homoeopathy. Proponents of homotoxicology understand it as a modern extension of homoeopathy developed partly in response to the effects of the Industrial Revolution, which imposed chemical pollutants on the human body. 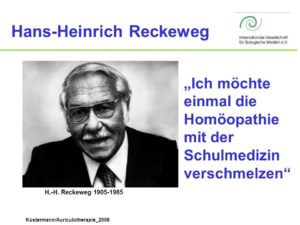 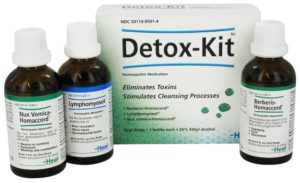 According to the assumptions of homotoxicology, any human disease is the result of toxins, which originate either from within the body or from its environment. Allegedly, each disease process runs through six speciﬁc phases and is the expression of the body’s attempt to cope with these toxins. Diseases are thus viewed  as biologically useful defence mechanisms. Health, on the other hand, is the expression of the absence of toxins in our body. It seems obvious that these assumptions are not based on science and bear no relationship to accepted principles of toxicology or therapeutics. In other words, homotoxicology is not plausible.
The therapeutic strategies of homotoxicology are essentially threefold:

Frequently used homotoxicological remedies are ﬁxed combinations of homeopathically prepared remedies such as nosodes, suis-organ preparations and conventional drugs. All these remedies are diluted and potentised according to the rules of homoeopathy. Proponents of homotoxicology claim that they activate what Reckeweg called the ‘greater defence system’— a concerted neurological, endocrine, immunological, metabolic and connective tissue response that can give rise to symptoms and thus excretes homotoxins. Homotoxicological remedies are produced by Heel, Germany and are sold in over 60 countries. The crucial diﬀerence between homotoxicology and homoeopathy is that the latter follows the ‘like cures like’ principle, while the former does not. As this is the defining principle of homeopathy, it would be clearly wrong to assume that homotoxicology is a form of homeopathy.

So, I ask again: what is homotoxicology?

It is little more than homeopathic nonsense + detox nonsense + some more nonsense.

My advice is to say well clear of it.

11 Responses to Homotoxicology: ‘the best kept detox secret’? No, it’s even worse than homeopathy!