Homeopathy is not helpful for depression – on the contrary, it depresses me!

This systematic review included 18 studies assessing homeopathy in depression. Two double-blind placebo-controlled trials of homeopathic medicinal products (HMPs) for depression were assessed. The first trial (N = 91) with high risk of bias found HMPs were non-inferior to fluoxetine at 4 (p = 0.654) and 8 weeks (p = 0.965); whereas the second trial (N = 133), with low risk of bias, found HMPs was comparable to fluoxetine (p = 0.082) and superior to placebo (p < 0.005) at 6 weeks.

The authors concluded that limited evidence from two placebo-controlled double-blinded trials suggests HMPs might be comparable to antidepressants and superior to placebo in depression, and patients treated by homeopaths report improvement in depression. Overall, the evidence gives a potentially promising risk benefit ratio. There is a need for additional high quality studies.

It is worth having a look at these two studies, I think.

Here is its abstract:

Homeopathy is a complementary and integrative medicine used in depression, The aim of this study is to investigate the non-inferiority and tolerability of individualized homeopathic medicines [Quinquagintamillesmial (Q-potencies)] in acute depression, using fluoxetine as active control. Ninety-one outpatients with moderate to severe depression were assigned to receive an individualized homeopathic medicine or fluoxetine 20 mg day−1 (up to 40 mg day−1) in a prospective, randomized, double-blind double-dummy 8-week, single-center trial. Primary efficacy measure was the analysis of the mean change in the Montgomery & Åsberg Depression Rating Scale (MADRS) depression scores, using a non-inferiority test with margin of 1.45. Secondary efficacy outcomes were response and remission rates. Tolerability was assessed with the side effect rating scale of the Scandinavian Society of Psychopharmacology. Mean MADRS scores differences were not significant at the 4th (P = .654) and 8th weeks (P = .965) of treatment. Non-inferiority of homeopathy was indicated because the upper limit of the confidence interval (CI) for mean difference in MADRS change was less than the non-inferiority margin: mean differences (homeopathy-fluoxetine) were −3.04 (95% CI −6.95, 0.86) and −2.4 (95% CI −6.05, 0.77) at 4th and 8th week, respectively. There were no significant differences between the percentages of response or remission rates in both groups. Tolerability: there were no significant differences between the side effects rates, although a higher percentage of patients treated with fluoxetine reported troublesome side effects and there was a trend toward greater treatment interruption for adverse effects in the fluoxetine group. This study illustrates the feasibility of randomized controlled double-blind trials of homeopathy in depression and indicates the non-inferiority of individualized homeopathic Q-potencies as compared to fluoxetine in acute treatment of outpatients with moderate to severe depression.

There are many important points to make about this trial:

Here is its abstract:

Background: Perimenopausal period refers to the interval when women’s menstrual cycles become irregular and is characterized by an increased risk of depression. Use of homeopathy to treat depression is widespread but there is a lack of clinical trials about its efficacy in depression in peri- and postmenopausal women. The aim of this study was to assess efficacy and safety of individualized homeopathic treatment versus placebo and fluoxetine versus placebo in peri- and postmenopausal women with moderate to severe depression.

Methods/Design: A randomized, placebo-controlled, double-blind, double-dummy, superiority, three-arm trial with a 6 week follow-up study was conducted. The study was performed in a public research hospital in Mexico City in the outpatient service of homeopathy. One hundred thirty-three peri- and postmenopausal women diagnosed with major depression according to DSM-IV (moderate to severe intensity) were included. The outcomes were: change in the mean total score among groups on the 17-item Hamilton Rating Scale for Depression, Beck Depression Inventory and Greene Scale, after 6 weeks of treatment, response and remission rates, and safety. Efficacy data were analyzed in the intention-to-treat population (ANOVA with Bonferroni post-hoc test).

Results: After a 6-week treatment, homeopathic group was more effective than placebo by 5 points in Hamilton Scale. Response rate was 54.5% and remission rate, 15.9%. There was a significant difference among groups in response rate definition only, but not in remission rate. Fluoxetine-placebo difference was 3.2 points. No differences were observed among groups in the Beck Depression Inventory. Homeopathic group was superior to placebo in Greene Climacteric Scale (8.6 points). Fluoxetine was not different from placebo in Greene Climacteric Scale. 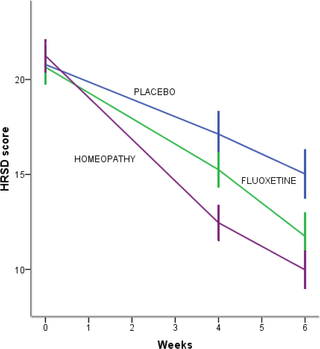 And here are my critical remarks about this trial:

Considering all this, I feel that the conclusions of the above review are far too optimistic and not justified. In fact, I find them misleading, dangerous, unethical and depressing.

4 Responses to Homeopathy is not helpful for depression – on the contrary, it depresses me!