HOMEOPATHS AGAINST VACCINATION: “The decision to vaccinate and how you implement that decision is yours and yours alone”

She is a professional registered homeopath, based in Charing – East Kent, UK. She has been in practice since 1997. During this time she has developed a busy practice, alongside teaching, running students’ clinics and tutorials. She was a team member of the Ghana Homeopathy Project soon after it started, and later became their treasurer as well. Grace has published in the Journal Homeopathy in Practice, and HPathy. She also is an ‘Energy EFT Master Practitioner Trainer’ and a ‘qualified CEASE therapist’.

And what is the Ghana Homeopathy Project ? It is an organization whose goal is the establishment of homeopathy as a recognised part of the health care system in Africa and Ghana in particular. Their objective is the relief and prevention of disease. They support the development of homeopathic education and wish to make homeopathy available to deprived communities as a valid and affordable form of treatment. 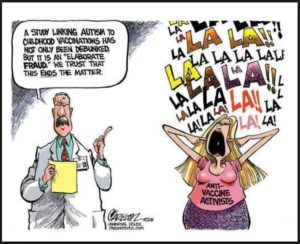 The lengthy article by Grace Dasilva-Hill re-hashes all the bogus arguments about immunisation that you could ever wish for. I will show you only what she calls her ‘conclusions’:

…at the present time we have only just scratched the surface of the issue of autism and ADHD; my aim in this article is to challenge the reader to pause, reflect and ask: do vaccines do more good than harm, or it is actually the other way round? Just who is considered to be responsible for my health and that of my family – my doctor, my country’s government or myself? Do we need to stand up as a profession, and be more pro-active?

The big question seems to be, are we not only failing our patients but also the greater good of the world’s populations, unless we question and do not just ‘accept’ what science and medicine tells us, especially as ‘vested interests’ seem to have such a strong influence on what we are told?
The health journalist Phillip Day has done just that in his book ‘Health Wars’ – he argues how the multinationals have a vested interest in keeping all of us ill, for this is the only way that they can continue making money. His propositions are supported by Goldman Sacks Bank which recently stated that they would not invest in the alternative health industry because it tends to cure people, so there is little profit to be made from it.

I invite you to become an advocate for those who are unable or who are too young to ask questions, or to stand up for themselves, or whose parents don’t have the knowledge or tenacity to challenge.
Children and young adults suffering with autism, ADHD, ASD, deserve our loyalty, support and action.

In the UK, we recently shared the anguish and pain felt by baby Alfie Evans’ parents and family. It is impossible for anyone who is caring to witness such horror, and not to ask any questions. Hopefully we will learn much from this very sad event. There are questions not only about causative factors (ie. the role that vaccinations may have played), but also the issue of parental rights versus the State’s perceived protectionist rights.

What has been happening in the field of healthcare is fast becoming unsustainable. On the other hand Homeopathy has so much to offer, being a sustainable form of medicine not influenced by market forces.

One could argue that one of the reasons why the denialists want to see the demise of homeopathy and other natural modalities, is that more and more people are choosing these modes of healthcare in place of conventional medicine which is reductionist in approach and only has drugs to offer.

I find myself wondering whether there is a need for something radically different to happen. As a profession, do we need to do something collectively? Do we need to stand up more, do we need to speak up more? How do we go about doing this? I know that I am asking more questions than providing answers, and this is because at the moment I don’t have the answers either. But I have a deep and sincere desire to do my best to make a difference that will be both worthwhile and sustainable.
I would like to believe that others in our community would like to do the same for the bigger benefit of sustainable and effective healthcare for all.

Of course, these words are not really ‘conclusions’, they are just a continuation of a barmy rant.

And yes, such articles exist in abundance. Many homeopaths are active campaigners against vaccination.

The Society of Homeopaths (SoH), the professional UK organisation for lay homeopaths, has recently stated that … it is unethical for a homeopath to advise a patient against the use of conventional vaccines…  This could not be clearer! Yet, I suspect that the homeopaths put out such statements mainly to cover their backs and subsequently they do what they feel like – and they rarely feel like supporting vaccinations.

They obviously try to give the impression that lay homeopaths are not antivaxers. I fear, however, this impression is wrong: as we have discussed repeatedly on this blog, many homeopaths do advise their patients against immunisation. And many claim that homeopathic immunisations are an effective alternative. It takes not long to find even VIP-members of the SoH putting parents off from immunising their kids. And thanks to the Ghana Homeopathy and several similar projects, this is happening not just in the UK but also in Africa and elsewhere.

Is that not irresponsible?

Is that not illegal?

Apparently not, because such homeopaths usually add a clever disclaimer; Grace Dasilva-Hill for instance states that  Any information obtained here is not to be construed as medical OR legal advice. The decision to vaccinate and how you implement that decision is yours and yours alone.

17 Responses to HOMEOPATHS AGAINST VACCINATION: “The decision to vaccinate and how you implement that decision is yours and yours alone”