Medicine, magic and morality (press-release by our publisher, Springer) 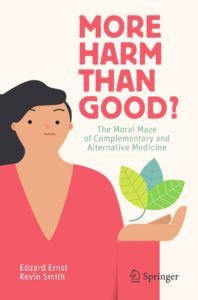 Yesterday, a press-release about our new book has been distributed by our publisher. As I hope than many regular readers of my blog might want to read this book – if you don’t want to buy it, please get it via your library – I decided to re-publish the press-release here:

Governments must legislate to regulate and restrict the sale of complementary and alternative therapies, conclude authors of new book More Harm Than Good.

The only downside to regulating such a controversial industry is that regulation could confer upon it an undeserved stamp of respectability and approval. At best, it can ensure the competent delivery of therapies that are inherently incompetent.

This is just one of the ethical dilemmas at the heart of the book. In all areas of healthcare, consumers are entitled to expect essential elements of medical ethics to be upheld. These include access to competent, appropriately-trained practitioners who base treatment decisions on evidence from robust scientific research. Such requirements are frequently neglected, ignored or wilfully violated in CAM.

“We would argue that a competent healthcare professional should be defined as one who practices or recommends plausible therapies that are supported by robust evidence,” says bioethicist Kevin Smith.

“Regrettably, the reality is that many CAM proponents allow themselves to be deluded as to the efficacy or safety of their chosen therapy, thus putting at risk the health of those who heed their advice or receive their treatment,” he says.

Therapies covered include homeopathy, acupuncture, chiropractic, iridology, Reiki, crystal healing, naturopathy, intercessory prayer, wet cupping, Bach flower therapy, Ukrain and craniosacral therapy. Their inappropriate use can not only raises false hope and inflicts financial hardship on consumers, but can also be dangerous; either through direct harm or because patients fail to receive more effective treatment. For example, advice given by homeopaths to diabetic patients has the potential to kill them; and when anthroposophic doctors advise against vaccination, they can be held responsible for measles outbreaks.

There are even ethical concerns to subjecting such therapies to clinical research. In mainstream medical research, a convincing database from pre-clinical research is accumulated before patients are experimented upon. However, this is mostly not possible with CAM. Pre-scientific forms of medicine have been used since time immemorial, but their persistence alone does not make them credible or effective. Some are based on notions so deeply implausible that accepting them is tantamount to believing in magic.

“Dogma and ideology, not rationality and evidence, are the drivers of CAM practice,” says Professor Edzard Ernst.

As I already stated above, I hope you will read our new book. It offers something that has, I think, not been attempted before: it critically evaluates many aspects of alternative medicine by holding them to the ethical standards of medicine. Previously, we have often been asking WHERE IS THE EVIDENCE FOR THIS OR THAT CLAIM? In our book, we ask different questions: IS THIS OR THAT ASPECT OF ALTERNATIVE MEDICINE ETHICAL? Of course, the evidence question does come into this too, but our approach in this book is much broader.

The conclusions we draw are often surprising, sometimes even provocative.

Well, you will see for yourself (I hope).

14 Responses to Medicine, magic and morality (press-release by our publisher, Springer)