A traditional cancer remedy that shows some promise?

Antrodia cinnamomea (AC) is a fungus which is used in Taiwan as a remedy for cancer, hypertension, hangover and other conditions. There are several commercial AC products and the annual market is worth over $100 million in Taiwan alone.

A total of 37 subjects with gastric, lung, liver, breast, and colorectal cancer (17 in the AC group, 20 in the placebo group) were enrolled in the study. Disease progression was the primary cause of death in 4 (33.3 %) AC and 8 (66.7 %) placebo recipients. Mean OSs were 5.4 months for the AC group and 5.0 months for the placebo group (p = 0.340), and the DCRs were 41.2 and 55 %, respectively (p = 0.33). Most hematologic, liver, or kidney functions did not differ significantly between the two groups, but platelet counts were lower in the AC group than in the placebo group (p = 0.02). QoL assessments were similar in the two groups, except that the AC group showed significant improvements in quality of sleep (p = 0.04). 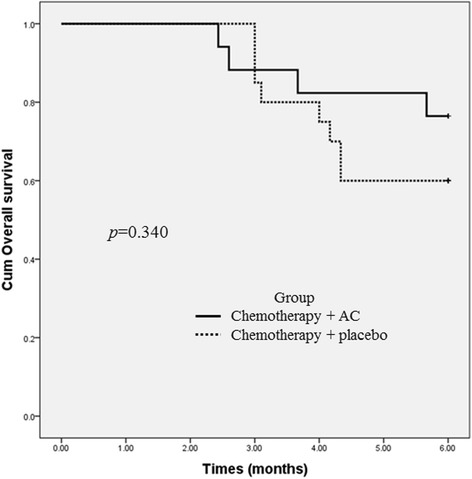 The above figure shows the survival curves for both groups.

The authors concluded as follows: Although we found a lower mortality rate and longer mean OS in the AC group than in the control group, AC combined with chemotherapy was not shown to improve the outcome of advanced cancer patients, possibly due to the small sample size. In fact, the combination may present a potential risk of lowered platelet counts. Adequately powered clinical trials will be necessary to address this question.

I agree, the survival curve looks promising. But we must not get carried away: this was a tiny sample size and a relatively short treatment period. Thus the difference could be a coincidence or an artefact.

The investigators are sufficiently cautious in the interpretation of their findings, and most of us would probably agree that it is necessary to submit such traditional remedies to proper scientific tests. Yet, I feel a sense of unease when I read such articles.

On the one hand, it is possible that such investigations meaningfully contribute to progress. On the other hand, I wonder whether they merely end up providing a significant boost to the trade of bogus remedies sold at high prices to desperate patients. Do the benefits really out-weigh the risks? We will probably never know.

But to minimize the risk, the authors should now swiftly conduct a more definitive trial and create some clarity about the value or otherwise of this traditional cancer remedy.

4 Responses to A traditional cancer remedy that shows some promise?