Astro-homeopathy: “a beautiful blend of Astrology and Homoeopathy” 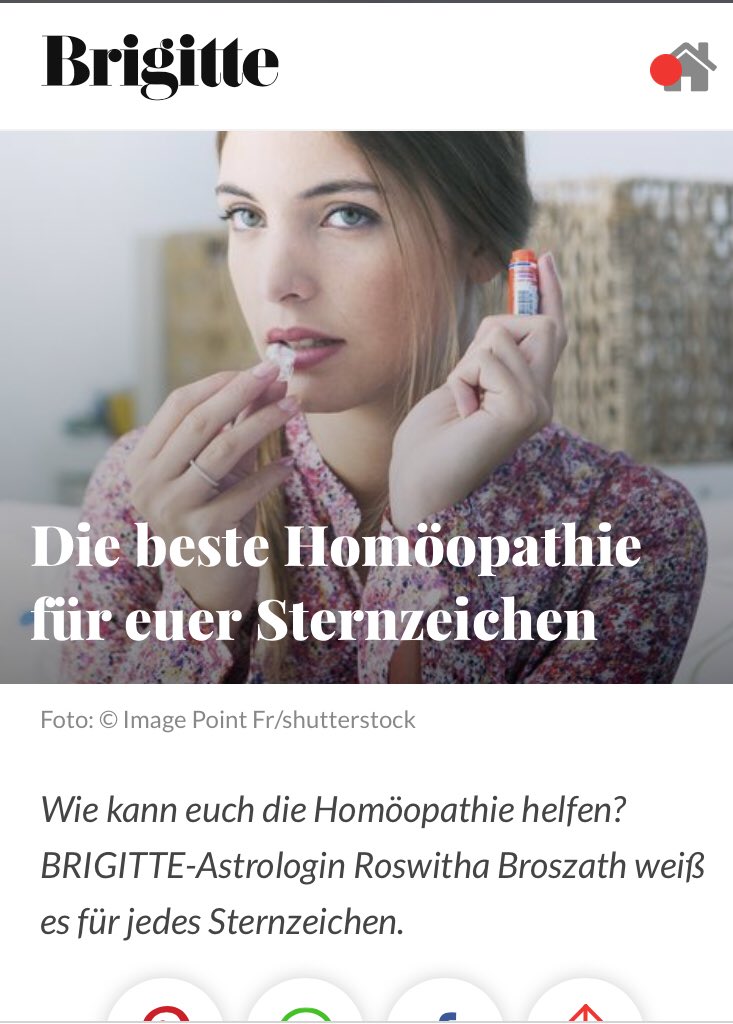 The above advertisement, apparently from the German woman’s magazine ‘Brigitte’, came to me via Twitter. Naturally, I thought someone had made a joke. Just to be sure, I quickly conducted a simple search for ‘astro-homeopathy’ and found numerous articles which collectively made my theory most unlikely.

Yes, there are people out there who advocate astro-homeopathy. This website, for instance informs us that:

Astro homeopathy is based on a very unique idea of relating homeopathy with astrology. Many people follow the astrohomeopathy principles and lead a healthy life. You can also try astro homeopathy healing methods so that you can lead a life free from health hazards and fitness problems.

Astrology and homeopathy are bridged in astro homeopathy. An astrohomeopathy reading for you finds out your sun sign and the body parts related to your sign of the zodiac, and tells you the health problems you have the possibility to suffer from (if, of course, there is any). In addition, you also come to know the homeopathic remedies for the health problems.

… In Astrohomoeopathy, which is a beautiful blend of Astrology and Homoeopathy, the horoscope serves as an invaluable diagnostic tool to provide a unique insight into the patient’s mental, emotional and physical makeup, which is indicated by the placement of planets in various signs and houses at the time of birth.

Each planet and its sign have certain characteristics, which may be weak or strong, depending on their placement in the horoscope. By matching these characteristics of the planets and their signs with the symptoms of Homoeopathic remedies, it is possible to connect them in order to select the right medicine.

By knowing the characteristic of houses and planets in ones horoscope, one can determine the key features and disposition of patient, the most important characteristics/features in the chart and the remedies to be covered.

After a complete case study, the physician comes to a group of remedies with the Horoscope which helps to distinguish these medicines by considering the key points.

From a Horoscope one can also understand how strong is the constitution by knowing the condition of his Ascendant and its Lord which will explained further with examples.The main keys to health are the state of Ascendant, its Lord and strength of malefic in the chart. I wouldn’t go in detail with regard to Astrology basics as one can learn the basic principals from a range of Astrology books available.

A third article concluded: Homeopathy, astrology and psychology are two of the most fascinating humanistic disciplines. They can be an invaluable combination. For finding the simillimum, astrology is not needed every time, yet it remains in our toolbox for when needed and as a constant support.

It seems that Einstein (as reported by my late friend Gustav Born) was wrong when he stated that: “If one were to lock up 10 very clever people in a room and told them they were only allowed out once they had come up with the most stupid idea conceivable, they would soon come up with homeopathy.”

The 10 very clever people would have had to come up with astro-homeopathy!

37 Responses to Astro-homeopathy: “a beautiful blend of Astrology and Homoeopathy”