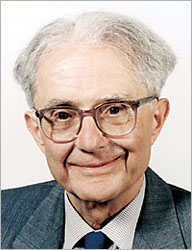 Gustav was born into a Jewish family that emigrated from 1930s Goettingen (Germany) to the UK. His father Max, a friend of Einstein, was a physicist who received a Nobel Prize for his work in quantum mechanics. Gustav  served in the British forces as a doctor during WW2. After the war, he became a pharmacologist in London and Cambridge who had many achievements to his name. For instance, he discovered the mechanisms through which the body stops bleeding and initiates blood clotting. He also invented the platelet aggregometer that is still used universally to quantify platelet activity and which he never patented so that not he but mankind would benefit from it. Gustav was indefatigable and continued his research for many years after his retirement. His work was crowned with uncounted scientific awards.

There have been numerous, much more detailed obituaries honouring Gustav e. g.:

Mine is merely a personal tribute. I met Gustav in the early 1990s while working in Vienna. We became close friends, and he took me under his wings, encouraged me to come to the UK, wrote a glowing reference when I applied for the Exeter post, and gave me moral support whenever I needed it.

After I had moved to the UK, we regularly met, and he even came to my 50th birthday party insisting to make a speech. About 15 years ago, he once attended one of my public lectures on alternative medicine; afterwards his comment was: “you know, your work is going to save lives.” Since my retirement, he kept phoning me at home (apparently Gustav had an irresistible attraction to the telephone) and urged me, usually speaking in German, to arrange a meeting. We always concluded that this must be soon; sadly, however, this did not happen.

Gustav was a great story-teller. One of his preferred anecdotes related to homeopathy. He recounted (interrupting himself giggling) that, when Einstein and his father once were talking, someone mentioned homeopathy and asked them what they thought of it. Einstein reflected for a little while and then said: “If one were to lock up 10 very clever people in a room and told them they were only allowed out once they had come up with the most stupid idea conceivable, they would soon come up with homeopathy.”

It is therefore not surprising that, when I invited Gustav to contribute a chapter to my book ‘HEALING, HYPE OR HARM?‘, he agreed to write an essay entitled ‘HOMEOPATHY IN CONTEXT’. Here is a short extract from it: What can be done to counteract the persistence of homeopathy? Its unwarranted claims must be continuously exposed. The diversion of public money from the proper purposed of the NHS must be stopped.

I shall miss Gustav for his clear thinking, his wry humour, his unfailing support and fatherly friendship.