Yes, to a large extend, quacks make a living by advertising lies. A paper just published confirms our worst fears.

This survey was aimed at identifying the frequency and qualitative characteristics of marketing claims made by Canadian chiropractors, naturopaths, homeopaths and acupuncturists relating to the diagnosis and treatment of allergy and asthma. 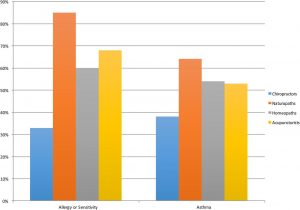 [Legend to figure above: Percentage of alternative medicine clinic websites advertising at least one of diagnosis, treatment or efficacy for allergy/sensitivity or asthma. Presenting the data in this way demonstrates that the Canadian naturopath, homeopath and acupuncturist websites studied have >50% rates of making at least one health-related claim for both allergy/sensitivity and asthma.]

The authors concluded that the majority of alternative healthcare clinics studied advertised interventions for allergy and asthma. Many offerings are unproven. A policy response may be warranted in order to safeguard the public interest.

In the discussion section, the authors state: “These claims raise ethical issues, because evidence in support of many of the tests and treatments identified on the websites studied is lacking. For example, food-specific IgG testing was commonly advertised, despite the fact that the Canadian Society of Allergy and Clinical Immunology has recommended not to use this test due to the absence of a body of research supporting it. Live blood analysis, vega/electrodiagnostic testing, intravenous vitamin C, probiotics, homeopathic allergy remedies and several other tests and treatments offered all lack substantial scientific evidence of efficacy. Some of the proposed treatments are so absurd that they lack even the most basic scientific plausibility, such as ionic foot bath detoxification…

Perhaps most concerning is the fact that several proposed treatments for allergy, sensitivity or asthma are potentially harmful. These include intravenous hydrogen peroxide, spinal manipulation and possibly others. Furthermore, a negative effect of the use of invalid and inaccurate allergy testing is the likelihood that such testing will lead to alterations and exclusions in diets, which can subsequently result in malnutrition and other physiological problems…”

This survey originates from Canada, and one might argue that elsewhere the situation is not quite as bad. However, I would doubt it; on the contrary, I would not be surprised to learn that, in some other countries, it is even worse.

Several national regulators have, at long last, become aware of the dangers of advertising of outright quackery. Consequently, some measures are now beginning to be taken against it. I would nevertheless argue that these actions are far too slow and by no means sufficiently effective.

We easily forget that asthma, for instance, is a potentially life-threatening disease. Advertising of bogus claims is therefore  much more than a forgivable exaggeration aimed at maximising the income of alternative practitioners – it is a serious threat to public health.

We must insist that regulators protect us from such quackery and prevent the serious harm it can do.